Curiosity-XX407 is approaching the earth’s atmosphere. The space ship is returning from its exploration and ready to reach the safe harbor. Mission completed: Moon, Mars & Mercury. 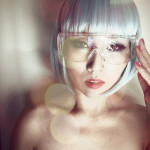 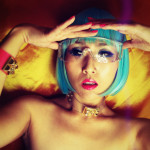 With one look at the fuel tank Curiosity-XX407 realized that there is no other option left than entering the planet of home.

C-XX407: “Mayday, Mayday, Mayday. Curiosity XX-407 is running out of fuel, other between stops not possible!”

The idea for this series of selfies arose during some random shopping tours at the corner for electronic gadgets in China Town, Bangkok. While accompany a friend looking for some electronic components I was distracted by the flashing glow of LED light chains in numerous lighting shops. At the beginning I had the silly idea to wrap this 5 meters long LED light chain around my body and see how this glowing accessory would decorate my neck. Not only the risk that the plug of the light chain was self constructed let me reject the idea (my friend warned me that the plug adapter might explode if I connect the cable in the wrong way), but a also the slight electronic pinches and the heat were bearable. The result wasn’t convincing though. My first try looks like my head is floating and ready to take off from my body.

Me, wrapped with a 5 meters LED light chain around my neck which is directly plugged into the socket.

Gladly I discovered a plan B before I ended up with not knowing what to do with the LED. I found that the reflection of the LED looks quite appealing and alien on my construction glasses. This was the beginn of the spacey story. And for the rest of the story… Well, it was the most hilarious reaction I got after sharing a selfie with someone. Our chat conversation became content of my tragically ending destiny of Mission Curiosity.

IN MY TRANSFORMATION KIT

Not only the cool LED light I found in China Town but also that icy blue wig. The wig shop is located in one of this most crowded alleys where you can only move with the flow like an ant among thousands.  However it won’t be the last time I found my right head covering there.

The safety glasses crossed my way in a costume shop in Platinum Fashion Mall in Bangkok. Another shopping paradise on this beautiful piece of earth. I saw some other amazing on stage stuffs that made me thought Madonna would source her costumes there.

The necklace and bracelet came from my third major procurement source, Chatuchak Weekend Market in a small accessory shop called “Nana” on the main strip. The shop owner swears that her products are imported from Korea which is obviously not the case as I could read the Chinese characters on the product tag. I don’t see why this would make her products better or more unique but some of the things she sells haven’t been seen very often somewhere else.

Last but not least I will introduce you to my “radio speaker”. You might wonder what this little red item in my hand is. It is my Kenzo Amour Ryoko fragrance flacon. I’ve always loved the hand-charming design but didn’t know what to do besides decorating my make-up desk. But for this series of pictures this little detail put the icing on the cake of my “spacey exploration”. Since then, every morning when I make myself ready for work, putting the frangrance on my neck I add a new last step to my morning procedure: I talk into my little “speaker” and say: “A new day, a new mission. Off to exploration!”

HOW IT WAS PRODUCED

Edited with: fotor on iPhone 4S